Call me Frugal McDougal but I love completely using something until it is gone… and I mean E.V.E.R.Y. drop.  Whether it be the tiny sliver of a soap bar left, the smidge of toothpaste still in the end of the tube or THIS: 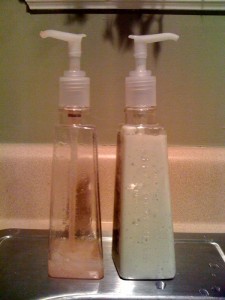 Note the soap dispenser on the left: There is clearly enough soap in there to wash your hands for DAYS yet!

Somehow the new soap dispenser arrived on the scene and is being used daily by the other half of the Catron house.  He lives with an attitude of plenty.  His philosophy: Why deal with the frustration of trying to get the last bit of soap out of the old dispenser when there is a perfectly good, new one full of soap just waiting to be used?

So while he’s enjoying the plenty, Frugal McDougal here is scraping the bottom of the old dispenser.  I just can’t bring myself to move on. 🙂

So tell me, are you a FRUGAL or a PLENTY?

In case you’ve missed them, other Catron House Wars:

Fight Back With Joy