I Lost My Shoulders 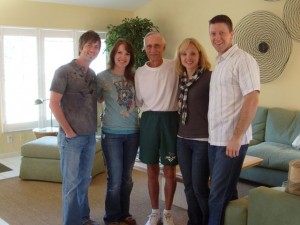 Yesterday we celebrated the life of a dear friend and mentor, Jimmy Holt.

Jimmy was a firecracker of a guy.  He lived life to the fullest and didn’t waste a minute.  He was constantly improving himself and surrounded himself with others who subscribed to the same mentality.

When I joined the Cross Point staff and began leading our Board of Directors, I’ll admit I was a little a lot terrified of trying to lead Jimmy Holt who was one of the founding members of the church and a long-standing Board member.

I don’t know how it happened, but somewhere along the way I earned Jimmy’s favor.  And being that Jimmy was a little “old school” and I was a young female, I knew that earning his approval was a very big deal.

Over time Jimmy and I developed a special friendship that I will cherish all my life.  He was a man of few words, so we didn’t have long, in depth conversations, but there was a mutual respect for one another and passion to serve the church together that created a special bond.

Jimmy believed in me whole-heartedly.  I remember one specific time his company was working on an office renovation project and he told his crew “you do whatever Jenni wants.”  That crew of workers wouldn’t put an outlet in the wall without asking me exactly where I wanted it placed.  If I had said 5 3/8″ from the door and 2 1/3″ from the ceiling, they would have put it exactly in that spot.

There were many times we were making big leadership decisions and I could count on Jimmy to cut to the chase and help our team make a decision.

Jimmy also invested in me personally.  He helped me develop my tennis game (but he never let me win 🙂 ).  And he and my husband enjoyed several rounds of golf.

I’ve had several months to come to terms with the fact that Jimmy wouldn’t be here much longer.  I was fortunate to have some good conversations in these last few months.  I was able to tell him what he meant to me and I was able to remind him how much of an influence he had been in so many lives.

But yesterday in the memorial service, it hit me… and it hit me hard.

Jimmy had become a set of shoulders for me to stand upon. He provided confidence, stability and reassurance in the days where I was uncertain about my leadership decisions.  I always knew I could fall back on Jimmy.  I always knew he would help me think through a decision and find a way to make a dream possible.

Today I feel wobbly. I lost a large part of my leadership support system.  I lost some shoulders that I didn’t even always realize I was resting on.  They were so comfortable… and so safe.

A part of me was forced to grow up yesterday.  Perhaps I need to become some shoulders for someone else.  Perhaps a new set of shoulders will come along.

But I will always remember and be thankful for those shoulders I had the privilege of standing on!