Give the Gift of Belief

A few years ago I invited a handful of ladies to join me for a leadership-focused Bible study group. I was feeling God nudge me to create a place for women with leadership gifts to gather together, build community and grow in their faith.

Frankly, it didn’t make sense. I was the Executive Director at Cross Point Church and my schedule was insane with the responsibilities of two building projects, a campus launch and a rapidly growing church and staff. I didn’t have time for it and yet it was clear that I needed to do it.

So I began to pray about who I should invite into the group. Quickly I identified a seemingly random group of leaders most of them in seasons of change or transition. One was leaving her job to pursue being a full-time author, another was hoping for a big promotion, two of them were starting a business together, another was a corporate attorney, a couple of them were in education and non-profit work, and a new stay-at-home mom detoxing from corporate life and adjusting to little sleep and lots of diapers. We were a quite a crew!

Most weeks I came racing into our time together late, frazzled and feeling like I was failing them. I had very little to give but I faithfully gathered them together.

It didn’t take long for friendships to form and for conversations to flow easily. While our seasons of life were different, the concern and fears were not. We listened to one another. We prayed for each other. We championed each others dreams.

The group disbanded when I made my move to California two years ago but the investment we made in each other still bears fruit today.

Recently one of those amazing ladies, Annie Downs, posted this: 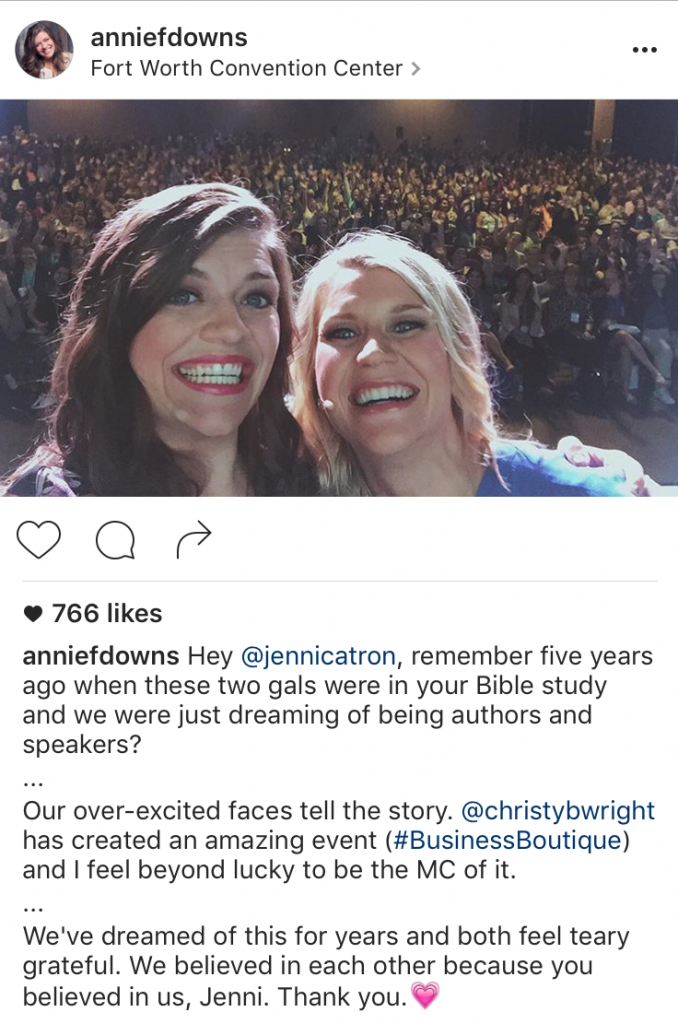 There was nothing magical about what I did. It was just obedience. It’s one of those rare times that I listened and obeyed even when it wasn’t convenient for me.

And look what God did.

The only thing I’ll take credit for is that I gave this group of women the gift of belief. I believed in them. I wanted to see them grow. I encouraged them in the dreams on their hearts. I prayed with them. I celebrated and I mourned with them.

“The gift of belief is one of the most powerful gifts we can give to others.”

Here’s the thing… the gift of belief is one of the most powerful gifts we can give to others. It doesn’t cost much…. mostly a little intentionality.

The gift of belief isn’t costly. It can produce radical return on investment.

The gift of belief is limitless. You won’t run out of it.

The gift of belief reproduces. When you give it to someone, they in turn pass it on to others.

Who can you give the gift of belief to today? I promise you there is someone in your life who needs you to see them and believe in them.